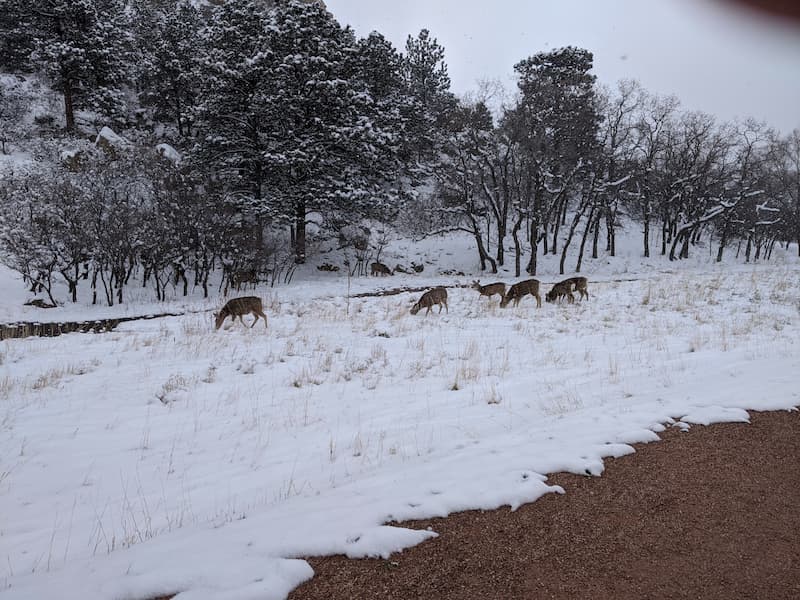 UVP 1A group of 15 volunteers stands behind a trailer filled with shovels, polaskis and trail-building tools at Ute Valley Park. Larry Kitt, the park ranger, tells the group: "It’s going to be an easy start for this trail-work year. I’m going to leave it to your crew leaders to give you a safety briefing, but I want to make sure that the top three things are done: safety, safety, fun!"

Trail leader Nick Cirincione, after dividing the volunteers into two groups, gives a quick safety talk. He ends by saying, "When you’re walking with the tools, they’re not over your shoulders like ‘Hi ho, it’s off to work we go,’ but you carry them in your hand below your waist. OK? Now let’s get to work." The group heads up the new trail, cutting vegetation, clearing brush, creating water bars, moving boulders and tamping down loose soil. A line of orange flags, placed by the ranger, marks the line of the trail, which makes a broad switchback up the hogback’s east slope before joining an existing social trail on the ridge crest.

"The trail we’re working on right now," says Dan Woods, president of Friends of Ute Valley Park, "goes along the top of the hogback before dropping down and joining Pine Ridge Trail. We started this trail last year and will get it done this spring."

Ute Valley Park, a 540-acre city parkland, spreads east of the rocky hogback beneath the mountains on the northwest edge of Colorado Springs. The park, popular with hikers, mountain bikers and climbers, protects a foothills ecosystem of ponderosa pine and scrub oak woodlands, broad meadows and broken rock outcrops. The park’s most dramatic feature is Pope’s Bluffs, a long ridge formed of Dakota sandstone.

"It looks like we have a big group today," said Woods earlier, looking across the parking lot on Vindicator Drive. "We usually have 10 to 15 volunteers, people of all ages, who show up to work on trail days." The Friends group organizes trail days from April through October on the first and third Wednesdays of each month. "It’s not a huge investment of time for people," said Woods, "since we work from 5:30 to about 7:30 in the evening."

Friends of Ute Valley Park was founded in late 2012 to help facilitate the city of Colorado Springs’ purchase of 203 acres of property owned by Hewlett Packard east of the park. The city coveted the land, along with developers who had platted it for 169 homes and five commercial sites. Woods said, "Our homeowner’s association over in Pinecliff where I live heard about the possible sale. Our president went to the parks department and asked, ‘How can we help with the purchase of the property?’"

The Parks, Recreation, and Cultural Services Department told the association "that it would be really nice if there was a Friends group who would take on the task of maintaining trails and making new trails in the existing park so that we could show that there was already some community ownership in the park."

"Quite frankly," said Woods, "if we hadn’t been in existence, it would have been a lot tougher to get the deal made. The $110,000 we raised was a piddly amount compared to the 7.5 million that was paid for the property, but it showed we had some skin in the game. People were pretty passionate about getting it into the park rather than have it developed." The final transfer of the HP property to Ute Valley Park was in 2015, with the new acres managed as open space by the Palmer Land Trust. A master plan was also approved, outlining new trails in the open space and the rest of the park, creating trailheads at Tech Center Drive and off the HP road, and closing social trails. Friends of Ute Valley Park played a key role in implementing these management goals.

This year, the Friends group and its volunteers will complete the West Ridge Trail and then finish work on the East Loop Trail, which crosses the new acreage, ending at the Tech Center Drive trailhead. This work began in September with the aid of a $20,000 grant from REI, which allowed the city to hire contract trail builders to use heavy equipment on difficult terrain.

After working for two hours, the sun drops behind the Rampart Range. Crew leader Cirincione says: "We should start gathering tools. Time to go."

Another volunteer chimes in: "Party pooper."

Cirincione replies: "No, the party pooper is the jobs that we all have, otherwise we could have been out here at 8 o’clock this morning having fun."

To help build trails and maintain Ute Valley Park, volunteer your time by coming out on the first and third Wednesdays through the fall. Sign up on the Friends of Ute Valley Park Facebook page or email dan@friendsofutevalleypark.com .